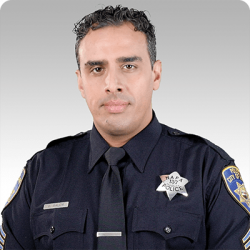 Officer Omar Salem is a police sergeant and SWAT team leader of the City of Napa Police Department in California. In addition to performing his policing duties, he has been instrumental in founding and cofounding important programs that empower and help the youth stay out trouble in his city, as well as those in which officers reach out to the city’s residents and listen to their concerns.

One such program Sgt. Salem founded is the Cops and Barbers program in which police officers in uniform visit barber shops around the city and spark authentic conversations with the barbers and their clients. Sgt. Salem also cofounded the LEGACY Youth Project at a local high school where he served as a Resource Officer. The goal of the project was to put an end to the endless cycle of “an eye for an eye” violence among rival gang members by providing a safe and transformative space for students. This resulted in a 100% high school graduation rate and a 75% increase in the average GPA. The project was later featured in a documentary called “The Mask You Live In.”

On Feb. 8, 2021, Sgt. Salem was awarded the Distinguished Service Medal by the Napa Police Department for his services since 2008.