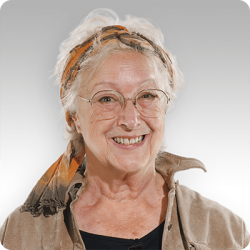 Lesley Hazleton is a British-American author whose work focuses on the intersection and interactions between politics and religion. Lesley has reported from Jerusalem for Time, and has written on the Middle East for numerous publications including The New York Times, The New York Review of Books, Harper’s, The Nation, and The New Republic

Hazleton has described herself as “a Jew who once seriously considered becoming a rabbi, a former convent schoolgirl who daydreamed about being a nun, an agnostic with a deep sense of religious mystery though no affinity for organized religion”. “Everything is paradox,” she has said. “The danger is one-dimensional thinking”.