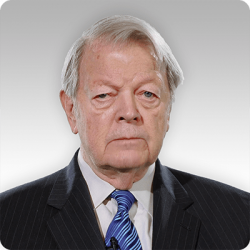 Garry Wills (Ph.D., Yale, 1961) is an American author, journalist, and historian, specializing in American history, politics, and religion, especially the history of the Catholic Church. He won a Pulitzer Prize for General Non-Fiction in 1993.

Wills has written nearly forty books and, since 1973, has been a frequent reviewer for The New York Review of Books. He became a faculty member of the History Department at Northwestern University in 1980, where he is currently an Emeritus Professor of History.