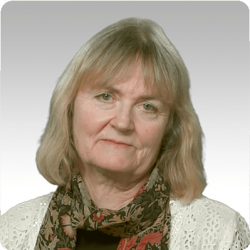 Diana Darke is a Middle East cultural expert with special focus on Syria. With degrees in Arabic from Oxford University and in Islamic Art & Architecture from SOAS, London, she has spent over 30 years specializing in the region, working for both government and commercial sectors.

Among her publications are the highly acclaimed My House in Damascus: An Inside View of the Syrian Crisis (2016), The Merchant of Syria (2018), and The Last Sanctuary in Aleppo (2019). Her most recent book, Stealing from the Saracens: How Islamic Architecture Shaped Europe, received three Book of the Year 2020 awards.

Frequently invited to speak at international events and media, such as the BBC, PBS, TRT, Al-Jazeera, and France24, her work on Syria has been published by the BBC website, The Sunday Times, The Guardian, and The Financial Times. She is a Non-Resident Scholar at Washington’s think-tank MEI (the Middle East Institute).