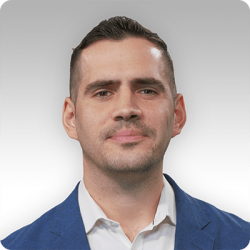 Dr. Craig Considine is a Catholic American of Irish and Italian descent working to build bridges of understanding in American society.

His next book, Islam in America: Exploring the Issues (ABC-CLIO, July 2019), is a reference work that provides an objective synthesis of information regarding the historical and contemporary placement of Islamic concepts and traditions in the United States.

His previous book, Muslims in America: Examining the Facts (ABC-CLIO, 2018), explores the veracity of controversial claims and beliefs surrounding U.S. Muslims and critically examines some of the leading social and political narratives coming out of the Islamophobia industry.

Considine is also the author of Islam, Race, and Pluralism in the Pakistani Diaspora (Routledge, 2017), a transatlantic comparison of the lived experiences of young first- and second-generation Pakistani Muslims and non-Muslims in Boston, MA and Dublin, Republic of Ireland. He holds a PhD from Trinity College Dublin (Republic of Ireland), an MSc from the University of London (U.K.), and a BA from American University in Washington, DC. Considine is a native of Needham, Massachusetts.