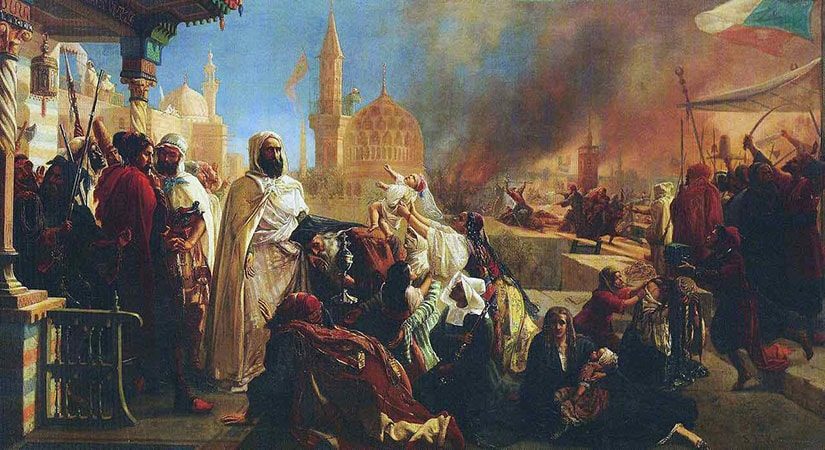 Emir Abdelkader al-Qadir al-Jazairi (1808-1883) was a venerated Algerian Islamic scholar and a military leader who led a collective resistance against the mid-nineteenth century French colonial invasion of Algeria. He is remembered today as one of the nineteenth century’s most inspiring leaders for his humane treatment of Christian opponents during Algeria’s anti-colonial struggle and for leading an intervention to rescue the Christian community in Damascus from certain massacre in the midst of sectarian riots in 1860.

Raised in his father’s zawiya, he excelled as a student, memorizing the Qur’an by the age of 14, and studying the Islamic religious sciences as well as subjects such as philosophy, medicine, and mathematics. He was especially known as a gifted orator who outshone his peers in the recitation of poetry and in delivering religious talks. His father, a notable spiritual leader affiliated with the Qadiriyya order, recognized his son’s precociousness, and cast a leadership role upon him shortly after the invasion of Algeria by France in 1830.

After his father, citing his old age, declined leading a tribal campaign against the French in 1832, Abdal Qadir found himself elected Emir, or Commander of the Faithful, to organize a resistance that, within a year under his leadership, would unite Algeria’s western tribes. Emir Abdal Qadir commenced a fifteen-year military struggle during which he often kept the French forces—which boasted one of the world’s most advanced armies—at bay through skillful guerilla tactics, strategic negotiation and treaties, and visionary state-building.

All the while, he demonstrated chivalry and compassion toward his opponents and allies alike, taking care, for instance, to respect the individual religious beliefs of his prisoners of war and also purposefully integrating Jews and Christians into his new state. At one point, he released his French prisoners because he did not have the means to feed them adequately. But, by 1847, partly due to ruthless, scorched-earth tactics by the French designed to isolate the Emir, he surrendered with a promise that he would not return to Algeria in exchange for exile in the East.

With the rise of the Second Republic, however, the French would break its monarchy’s promise, and the Emir was imprisoned in France until 1852, when new political circumstances and advocacy from French notables, including former prisoners that he had treated humanely, led to his release, with a generous pension, to Bursa, Turkey. In 1855, he moved to Damascus and occupied himself with devotion and scholarship, his first loves, writing a philosophical treatise and, later, a book on the Arabian horse.

But he would garner worldwide attention again in 1860 when a conflict between the Druze and Maronite Christians spread to Damascus. With the minority Christian population facing massacre, he led his Algerian companions into the Christian quarter to bring thousands of Christians into his home for safety. When a mob demanded their release, he refused, citing Islamic principles to protect innocents. He was credited with saving 10,000 lives and received gifts and accolades from political leaders in France, the United States, Great Britain, and many other parts of the world. The New York Times described him as “one of the few great men of the century,” and his legacy lives on today even in the United States, where the town of Elkader in the state of Iowa is named after him, and among Muslims around the world who regard him as embodying the highest ideals of their faith.